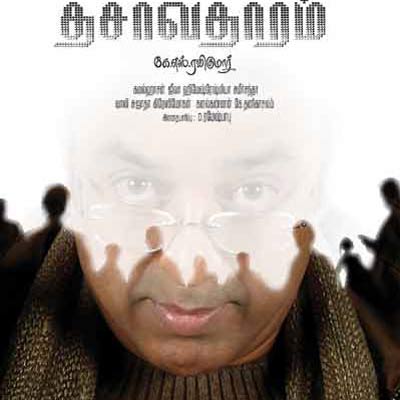 Now any movie which is primarily made with the premise of having the leading man play at least 10 different roles is bound to have some inherent limitations. For example, it is reasonably difficult to make all 10 roles meaty enough to have reasonable screen-time, importance and credibility. And it is also difficult to ensure that all interactions between these characters are plausible enough to warrant an amazing screenplay. This in a nutshell is what Dasavathaaram suffers from, a sometimes-jarring unbelievable screenplay, which funnily enough for a Kamal Haasan movie relies on ‘divine intervention’ on more occassions than one to move the story along towards a logical end.
From the time Kamal shows us his face, jumping up through the tunnel below the sanctum sanctorum of Lord Govindaraja Perumal with the words “Adiyen Rangarajan” (translation: I am Rangarajan), till the last frame of the movie which shows us the same smiling face of Lord Govindaraja Perumal, Dasavathaaram, the movie manages to keep the viewer glued to his seat with the following few good things about it –
1. Pacy screenplay – The movie has almost no moments where the audience is given a respite from the sheer speed with which things are happening, and the story is evolving. In fact, the screenplay has given so much importance to the actual story itself that ‘accompaniments’ such as comedy and music are either so imbibed with the situations themselves or are actually not present at all.
2. Sheer magnitude of the task – The fact that the makers of the movie and Kamal himself had to make all 10 characters believable alongwith a coherent story-line, which while being contemporary also had to convey what they intended to tell the audience was in itself well achieved. Especially considering that the generous use of graphics also added to the heady cocktail that the movie actually is.
3. Amazing amount of effort put into each and every frame of the movie – This movie is peppered with so many small things and incidents which force the audience to actually exercise their grey cells quite a bit. Plus, there is enough and more in every frame and every dialog of the movie to leave you thinking long after you have left the movie hall. While this is good for a ‘thinking audience’, the movie also has its usual masala stuff like high-speed chases, funny situations, jaw-dropping graphics, amazing stunts, etc to keep the average moviegoer happy.
4. No loose ends – The story ensures that all questions that are asked anytime in the movie are answered by the last frame. None of them are left out in the open, there are no knots that are still tied, all the questions and all the knots are untied by the end of the movie.
5. Subtlety in humor – While there is no designated comedian, some of the characters like George Bush and Krishnaveni are so ridiculously funny just by being themselves throughout the movie. This is something that Kamal manages to achieve wonderfully well in most of his movies. Some of the memorable characters in movie history such as Kameshwaran – the Palakkad cook in Michael Madana Kamarajan, Nair – the Malayalee friend in Panchatantiram, are all prime examples of such humurous characters, who are funny just by being themselves.
However, some of these above mentioned strengths of the movie turn out to be some of its downfalls as well, especially the racy screenplay. There is so much happening in the movie itself that at times the audience is a little overloaded with the details. And each frame is so filled with details, that one tends to miss out on either these details or the main story itself based on what grabs the audience’s attention more. This movie therefore becomes one which has to be watched at least 4-5 times to get a broader, overall perspective of what was going through the film-maker’s mind when he was creating it.
All in all, this is a must-watch movie for every Kamal Haasan fan. However, if you are not one of them, you would rather avoid this movie, especially considering that you will end up bad-mouthing it quite a bit after you actually get to watch it (because you simply won’t “get” what the movie is all about.
Cheers……..Jam

One thought on “Dasavatharam – Movie Review”

Please note that all images used in this blog are sourced from Google Images search, unless explicitly stated otherwise. It is not my intention to infringe upon any copyrights thereof and in case the owners of the images want the same to be removed, they are requested to leave behind a comment on the post on which their image is being used and the same shall be removed.
Back to top
%d bloggers like this: