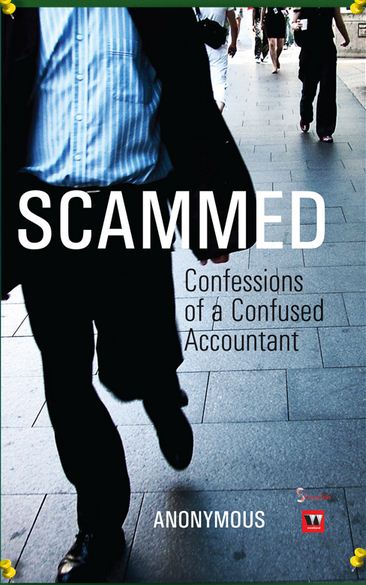 Given that this is my first written book review, request all readers of this particular post not to be too harsh on me. Having said that, I have reviewed approximately a 100 odd movies in my other blog http://mahabore.blogspot.in and have received quite a few good reviews of my posts there which gives me the confidence to go ahead with this. And if all goes well, this is probably going to be the first of quite a few books which I will be reviewing, courtesy the Book Review concept evangelised by www.blogadda.com With all the introductions done, here goes the book review of Scammed, Confessions of a Confused Accountant.

SCOCA (a nice acronym for the name of the book, if I say so myself) starts off with how Hitesh Patel, a young CPA working with a multinational accounting firm is leading a normal humdrum life struggling with a busy job schedule which leaves him with little time to do anything else. In the initial part of the book Hitesh comes across as somebody who is a good chap, but naive nevertheless. He doesn’t have the smarts required to move up in the corporate ladder and his naivete is taken advantage of by smarter peers such as Sahil at his workplace.

Fate puts Hitesh in the crosshairs of Venugopal Reddy, Owner of Supreme Motors whose financial accounts were being audited by his firm. Hitesh who uncovers a lot of issues with the Production, Finances and a few other practices of the company. This puts him under the scanner of Venu Reddy who is quite impressed with the fact that this young accountant was able to unearth some of these facts which had been hidden from him over the course of quite a few years. Venu Reddy then goes on to make an offer (which to quote Marlon Brando from ‘The Godfather’) Hitesh simply could not refuse. He offers Hitesh the job of a CEO of a new company which he would set up. Hitesh, in his desperate need to escape from his current life and work which was taking him nowhere accepts and this forms the basis for the rest of the story to develop.

As a CEO Hitesh initially makes all the right moves and in an inspired burst of energy manages to make quite a name for Super Cabs, the new company and himself. The company goes on to become one of the most talked about new companies and also ends up in Hitesh being noticed all over India, winning a few awards, etc. In the meantime, Sushma, Hitesh’s old friend from college also ends up with him and life seems to be going good for him. Little did Hitesh know that these few months were the relative calm before the storm.

The characters and people that Hitesh have to deal with on a daily basis as CEO of Super Cabs, his core team, his mentor Venu Reddy, all of them are people with shady pasts and even shadier intentions. They get together and in their own ways use Hitesh’s inexperience and his tireless ambitions to meet their own selfish ends. In fact as the story progresses, Hitesh ends up figuring out that there was a whole lot more to Venu Reddy’s offer than met the eye. While he tries to correct a few wrongs, he ends up ruffling a few feathers, and finds himself in a whole lot of trouble. He ends up being branded a criminal, the media ends up making Hitesh the poster-boy for all that is wrong with young India, Hitesh Patel suddenly is a wanted criminal by the police, and he ends up being on the run from the law.

What went wrong, what was Venu Reddy and the others’ plan all along, how does Hitesh end up embroiled in all this mess, and how he manages to get out this situation forms the rest of the story. The end has a particularly nice twist which I didn’t quite anticipate and ended up adding a lot to my reading experience.

I personally liked the fact that the author paid enough attention to the details but didn’t allow himself to get so bothered with all of them that he missed out on keeping the narrative moving along. The pace of the novel is just about right, not too slow and not too fast either. SCOCA is a quick read. I read the book over the course of 2.5 hrs over a 5 hr time period during a relatively relaxed day in office. It has enough speed to keep you turning the pages over.

The fact that all the characters are mostly caricatures of everyday people that I have come across is something that adds to the charm of the book. An extremely kiss-ass kind of manager like Sahil, a cliched Telugu businessman who has interests in the film field as well like Venu Reddy, a classic scum bag politician like GS Rao, a loud mouth Labor Union Leader like Mohan Babu, all of these are characters whom I have encountered in South Indian movies over time. In fact, given that the author has refused to identify himself, I am willing to hazard a guess that he is from Hyderabad, given all the subtle references to a lot of popular Telugu culture. If you are from Hyderabad and read the book carefully enough, you will surely get what I am talking about.

All in all a nice read. Well worth the time spent reading the book. Apt for a lazy weekend which has been kept aside for some light reading.

This review is a part of the Book Reviews Program at BlogAdda.com . Participate now to get free books!

2 thoughts on “Book Review : Scammed, Confessions of a Confused Accountant”