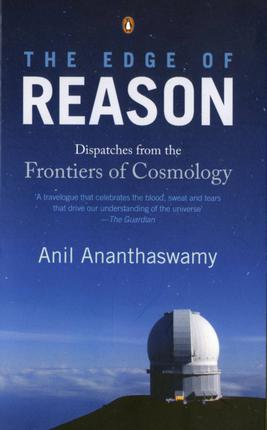 For some funny reason I really don’t remember what prompted me to decide to read this book and order it online. Having said that I personally believe that buying this book and actually ending up reading it and finishing it in one go (ie, without putting down the book to pick up another book to read) has benefited me in multiple ways.

(3) This book not only makes me want to read more, but also write more which I am hoping will end up in generating more blog posts such as this one and make me more of a regular writer / blogger.

To get to the book itself, it deals with Cosmology which Wikipedia defines as the academic discipline that seeks to understand the origin, evolution, structure, and ultimate fate of the Universe at large, as well as the natural laws that keep it in order. Wow, while I know that is a heavy definition with big words, big concepts, suffice to say that most of my understanding of the origin of our Universe began and ended with The Big Bang Theory (not the TV series, but the actual cosmological concept). And guess what it turns out that most modern cosmology is indeed dominated by The Big Bang Theory.

This book, The Edge of Reason (called “The Edge of Physics: A Journey to Earth’s Extremes to Unlock the Secrets of the Universe” outside of India) is part travelogue, part documentary-style writing which takes the author Anil Ananthaswamy from the tip of Mount Mauna Kea, a dormant volcano in Hawaii to deep mines in Minnesota, from Lake Baikal in Siberia to McMurdo Station in Antarctica, from the underground Large Hadron Collider in Switzerland to Mount Saraswathi in Ladakh. The author goes to these places to talk to the scientists, physicists, cosmologists and astronomers regarding to get more details regarding some of the experiments that they are conducting to answer questions regarding the origins of the universe.

While documenting his travels, the author describes in great detail the locations of these experiments, the rationale behind the choice of these varied locations, basic tenets of the experiments being conducted, descriptions of the questions that these experiments are trying to answer, as well as the history behind some of these questions themselves. This book manages to give us an insight into the brilliant minds of the physicists and cosmologists who asked these questions in the first place. In many ways, this book is a tribute to all those pioneer cosmologists who dared to ask the questions which nobody else asked, who dared to question the status-quo of existing theories regarding the origins of the universe, and some of the answers to the questions asked have the potential to radically change our existing knowledge regarding the cosmos itself.

It has to be agreed that this book requires a certain degree of knowledge of and interest in basic physics to be read. Also, the reader has to have the patience of actually slowing down, re-reading paragraphs and pages to put together complicated theories and concepts of cosmology. That being said, Anil Ananthaswamy manages to take the reader on a wonderful joyride around the world and also manages to paint quite a vivid picture of modern day cosmology. In fact, I would bet that more interest would be generated in this field if schools and colleges around the world made this book a part of their libraries and if possible, a part of their list of suggested readings in Physics.

A wonderful book which is a travelogue, cosmology reference guide (at a very basic level), introductory guide to some of the most profound ideas of cosmology and its propounders. A really good read.

Indiaplaza link to purchase the book in India

Flipkart link to purchase the book in India

Amazon link to purchase the book in the US