I am taking part in the Write Tribe Festival of Words – 1st to 7th September 2013.

This post is the first of a series of trying to correlate the Seven Sins to characters and incidents referred to in the Ramayana.

Please note that there are various versions of this great epic and therefore my post might contradict with what you have heard or read of this particular incident in the Ramayana. This is only an attempt to map the seven deadly sins to incidents or behavior of particular characters in the Ramayana in a given situation and I have taken liberties with my own interpretations of the same. No offense is meant to any version of this wonderful epic. 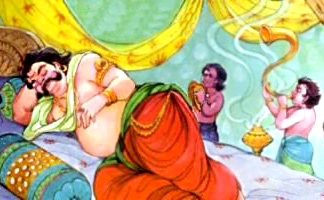 One version of the story has it that when Ravana, Vibhishana and Kumbhakarna were youngsters, they once prayed to Lord Brahma for his blessings. They were so sure that the Lord would be pleased with their penance and devotion that they had already decided what boon they were going to ask from him. Kumbhakarna was going to ask Lord Brahma for complete dominion over the heavens.

Indra, the King of the heavens knew about this wish and he therefore decided to intervene. He approached Saraswati, the Goddess of Learning, and requested her – “You have to help me, please make him make a mistake when he asks for his wish” to which Saraswati agreed.

Pleased by their penance, when the Lord appeared before them and granted them a wish each, Indra was aware that Kumbhakarna was going to wish for complete dominion over heaven. And due to Saraswati’s intervention instead of asking for “Indra asana” (Indra’s throne) he asked the Lord for “Nidra asana” (sleeping posture) which was immediately granted to him.

But Ravana immediately realized his brother’s mistake and requested the Lord to undo this boon as in reality it was a curse. Lord Brahma relented to Ravana’s entreaties and therefore modified the boon’s condition so that Kumbhakarna would sleep for six months at a time, be awake for one day and then go back to sleep for six months.

In fact, the effect of the humiliation was so demoralizing that Ravana had no other choice but to try and wake Kumbhakarna up before his six month sleep term was over. Given that this was Lord Brahma’s wish that they were undoing, the consequences of the same were never bound to be anything good, but Ravana had no choice. If he did not bring his best warrior on to the battlefield fighting by his armies’ side, Rama’s rag tag army of monkeys and bears would soon overcome his mighty forces. Simply the presence of Kumbhakarna would enthuse his armies so that they would get a second wind and fight Rama’s armies with more vigor.

Thus, the one sin of sloth ended up in Ravana having to go against the wishes of Lord Brahma, the consequences of which shall be discussed in another post detailing Kumbhakarna’s gluttony.