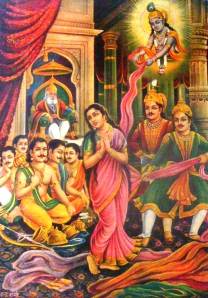 “Oh Krishna, if only you were here!” thought Draupadi. “Draupadi, the daughter of King Drupada of Panchala, the sister of the brave Drishtadyumna, your favorite Sakhi, your friend, the wife of the five Pandavas, would not have been humiliated so.”

“You would never have allowed Yudhishtira to place me, his wife, as a wager in the game of dice.”

This post is an imagining of what would have passed Draupadi’s mind when the Kauravas summoned her to the court after the game of dice and informed her that since Yudhishtira had lost her as a wager, she was now the slave of the Kauravas and they could do with her as they pleased. And if one goes by popular legend, Krishna heard her thoughts, and he miraculously helped her when Duhshasana tried to disrobe her in the court, in full view of everyone present.

Now, I will answer a question that many of us might have regarding this incident, why was Krishna not with the Pandavas during the game of dice.

Sometime earlier Krishna had killed Sishupala, his own cousin and foe, as part of his purpose as an avatar of Vishnu. Enraged by this, Salwa attacked Dwaraka to extract revenge for Sishupala’s death. Krishna therefore was busy fighting the armies of Salwa when Yudhishtira was invited for the game of dice by the Kauravas.

This post has been written as a part of Write Tribe’s 100 words on a Saturday – 5 prompt which is put up every alternate Saturday.

43 thoughts on “If only you were here”