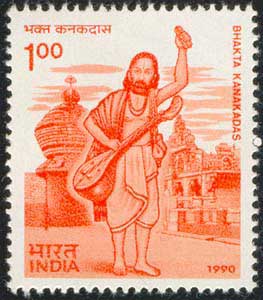 Kanakadasa was not allowed into the Udupi Krishna temple because he did not belong to the upper castes and was in those days it was considered sacrilegious to allow somebody from the lower castes into the temple. However, even the Gods bow to true devotion.

Kanakadasa stood outside the temple singing songs composed by him in honor of Lord Krishna, who deigned to turn to the West and gave a glimpse of his divine self to his devotee through a small window.

Such was the devotion that Kanakadasa showed through the medium of his devotional songs.

This post has been written for the Velvet Verbosity 100 Words #356 prompt where the post had to include the word glimpse.

Read more about Kanakadasa at this Wikipedia article [Link to article]

Please note that all images used in this blog are sourced from Google Images search, unless explicitly stated otherwise. It is not my intention to infringe upon any copyrights thereof and in case the owners of the images want the same to be removed, they are requested to leave behind a comment on the post on which their image is being used and the same shall be removed.
Back to top
%d bloggers like this: