The various avatars that Lord Vishnu took to save the world from imminent dangers are well documented and are quite popular with all Indian mythology buffs. This next series of Purana related posts will focus on telling these stories to readers. It must be noted that I am eliminating the popular avatars such as Rama, Krishna and Buddha for obvious reasons that these are avatars whose stories are enough material for separate blogs by themselves 😀  That being said, the focus of this series of posts will be on the lesser known avatars and some interesting facets of these stories.

Without further ado, the story of the Matsya Avatar follows

While the origins of the Matsya Avatar are quite hazy in terms of the fact that some sources state it to be a form of Brahma and others cite it to be that of Vishnu, I personally subscribe to the fish being an avatar of Vishnu and present a relatively hybrid version of the story from the Puranas here.

King Manu, the seventh of his name (ie, the seventh king of his era who was called Manu), also called Vaivasvata Manu, the son of Vivasvana was just ruler. And when it was time for him to retire, he handed over the kingdom to his son and went to the foothills of Mount Malaya and started a penance in the name of Lord Brahma. Pleased with his meditation, Brahma appeared in front of him and offered him a boon. Manu replied “I am well versed with the laws of creation and am therefore aware that sooner or later there will be pralaya (widespread destruction) after which the world as we know it will no longer exist. Please grant me the boon that it will be I who will save the world when it begins afresh after the destruction.” Pleased with his devotion, Brahma granted the boon to Manu. 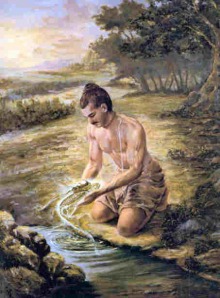 A few years passed and one day when Manu was performing his morning ablutions in a pond near his hermitage in the forest, he immersed his hands in the water so that he might offer some water as a prayer to his ancestors. When he raised his cupped hands, he noticed that a small fish was wriggling around in the water that he had collected in his palms. The fish looked at him in the eye and told him “Please do not put me back in the water. There are so many large fish in the pond that I am scared of being eaten up.” Manu was first surprised to have encountered a speaking fish and he immediately realized that this was no ordinary fish. Moved by the simple and sincere request of the fish, he put it inside his kamandalu (small jug with a spout carried by sages and holy men, to store water).

That night Manu went to sleep knowing fully well that the small fish to which he had offered protection would be safe from any dangers. However, when he woke up the next day, he heard the fish talking to him from inside the kamandalu “Please help me, your kamandalu is very small and stifling. I am unable to breathe inside this.” Hearing this, a surprised Manu went to his kamandalu and noticed that the fish has grown unusually large (upto sixteen finger lengths) in just one day. Overcoming his surprise, Manu took some water in a bigger vessel and put the fish inside that.