The majority of the stories surrounding the Varaha Avatar begin with Lord Vishnu assuming the shape of a boar, killing the asura Hiranyaksha and saving the earth, but I decided to go back some more steps and try to tell the story right from its very beginning. I would therefore request readers to please indulge me in this small but necessary detour to understand the very origins of this avatar of Vishnu. 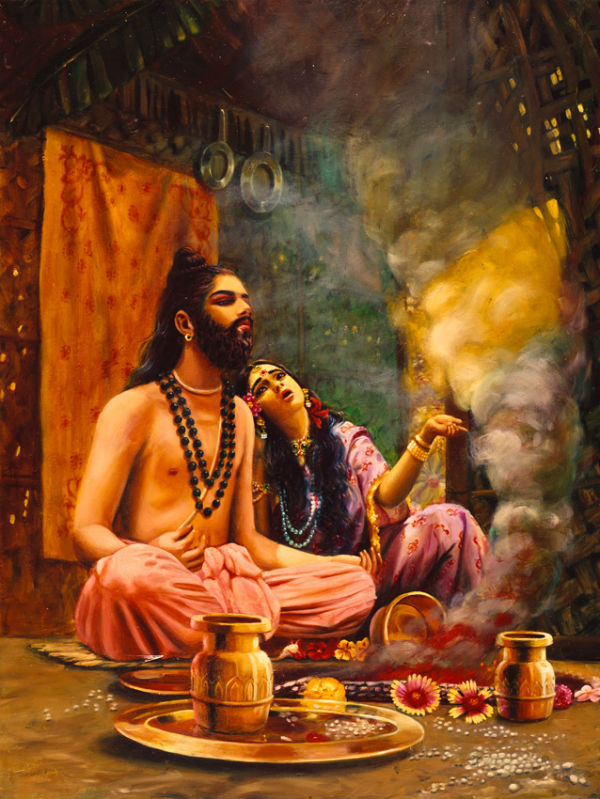 Once Diti, the daughter of Daksha, and the wife of Kasyapa approached her husband thus “O learned one, the arrows of Cupid have struck me and has affected me as a mad elephant affects a banana tree. I desire to have sons, which is the greatest honor for any married woman, and you will also become famous due to these sons spreading your fame and name far and wide.”

While Kasyapa understood and sympathized with his wife’s wish to have progeny from him, he requested her to wait for a few seconds citing the inauspiciousness of the particular time at which she had made this request. That particular time was inauspicious as horrible-looking ghosts and constant companions of Lord Shiva were visible at that moment.

Despite Kasyapa’s advice to the contrary, Diti was so enamored by her desire that she could not control herself and grabbed her husband’s clothes. Understanding his wife’s purpose and obliging her, the wise sage engaged in coitus with her, and after the deed cleansed himself and sat meditating.

Worried about the consequences of her actions, Diti approached her husband and requested him to protect her embryo from the wrath of Lord Shiva. She offered to perform penance in his honor and was confident that pleased with her meditation and penance, he would forgive her misdemeanor and mistake.

You will give birth to two contemptuous sons due to this deed of yours, and they shall be the cause of constant lamentation to all three worlds! They will kill poor faultless living beings, torture women and enrage the great souls.

And they will finally meet their end when the Lord of the universe, Vishnu will descend and kill them.”

When she heard that her sons would finally be killed by Vishnu, Diti immediately thanked the great sage while stating that it was good that they would be killed by the Supreme Lord as that would be a magnanimous end when compared to being killed by the wrath of brahmana devotees of the Lord. She knew that anybody who died due to the wrath of brahmana devotees was unwelcome even in hell and would have to suffer for all eternity.

Pleased with her devotion to Vishnu, her adoration for Shiva and her respect for him, Kasyapa went to state that one of the sons of her son (Prahlada, son of Hiranyakasipu) would be one of Vishnu’s greatest devotees and that his fame and devotion would be on par with Vishnu himself. Hearing that her grandson would go on to be a great devotee of the Lord and also that her sons would be killed by Vishnu himself, Diti was pleased.