Three people walk into a bar, or in their case, a ‘public house’ in the capital city of the kingdom. They formed a curious trio; one of them big, gigantic and endowed with great strength, one of them lithe, athletic and handsome and the third one with a ‘divine aura’ surrounding him. They did not look like people who usually frequented such places.

And to be honest, they were not from the group of people who frequented such places; if anything they belonged to a class of people who were usually served food and drinks in their private chambers and rarely even appeared in public, even less as commoners, as they did right now.

They had a good reason to put aside all ‘formal rules of engagement’ and adopt this unconventional approach. They were on a mission to gauge the public sentiment regarding the ‘powers that be’ of the city they were in; this information would prove invaluable to them in achieving their goal.

The trio of Bhima, Arjuna and Krishna knew that they had a formidable task ahead of them; that of slaying Jarasandha, the ruler of Magadha. 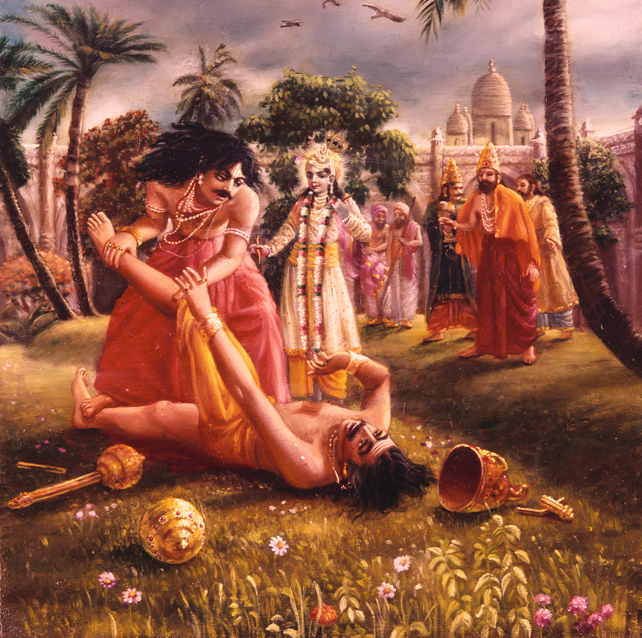 After being crowned the king of Indraprastha, Yudhisthira on the advice of elders and senior counselors sought out to perform the Rajasuya yagna to be crowned Chakravarthi, the king of kings, the emperor.

Krishna then mentioned that Yudhisthira could become an emperor only after he defeated Jarasandha, the king of Magadha. While the Pandavas had heard about the legend of the king and how he had been undefeated for a long time, they did not know his whole story. Upon being requested to do so, Krishna then proceeded to narrate the story to them.

There once lived a might king Vrihadratha, in Magadha. He was handsome, endued with energy and possessed affluence and wealth beyond measure. His glory was comparable with that of Surya, his forgiveness with Prithvi, his wrath with Yama and his wealth to Kubera.

He was married to the twin daughters of the king of Kasi and had an understanding with both of them that he would love them both equally and would not provide only one of them with preferential treatment. However, the king did not manage to have any progeny despite the passage of time. Despite his best efforts and performing various yagnas and sacrifices for being blessed with a child, he was not successful.

One day Vrihadratha heard that the holy man Chanda Kausika, the son of Kakshivat had come to Magadha in the course of his wandering and was now seated under a mango tree in the capital city. The king along with his wives went to the holy man bearing gifts and offered his obeisance to him. Pleased with his offering and his obeisance, the holy man granted the king a boon of his choice.

The king replied O holy one, it is time for me to forsake my kingdom and worldly pleasures and go into the woods to practice ascetic penances. However, I have no son to whom I can hand over my kingdom and do so.

Hearing these words of the king, the holy man closed his eyes and concentrated hard in his mind. Suddenly a mango from the tree he was sitting under fell on his lap. He took up the fruit, and chanting a few mantras, gave it to the king. O king, desist from going into the forest yet. Your wish is hereby fulfilled.

Hearing these words and filled with hope, the king and his wives returned to the palace. Keeping in mind the promise he had made to them, the king cut the mango into two equal halves and gave one half to each of his wives. And as an effect of the holy man’s powers, both the queens conceived with a child each. The king’s joy knew no bounds that day.

After a few months when both the queens delivered their babies, the king was shocked. Both of them delivered babies that were fragmented; each baby was born with one eye, one arm, one leg, half a stomach and half a face. The two midwives who oversaw the delivery of the babies wrapped them up, took them outside the palace by the back door and threw them away.

A rakshasha woman by name Jara happened to pass by on the path that these two half-babies lay. She took up the fragments and as if by force of fate she united the fragments of the babies with an intention of carrying away the babies. As soon as the fragments were united they formed a sturdy child of one body endued with life.

Then suddenly Jara found herself unable to carry the child which seemed to have a body as strong and hard as a thunderbolt. The infant then closed his fists, inserted them into his mouth as babies do and began to make a noise. The noise was akin to rain charged clouds thundering loudly.

Alarmed at this sound, the inmates of the palace including king Vrihadratha himself and his queens came running out. Seeing the lactating mothers, the sonless king, Jara thought to herself – I live within the dominion of a king who strongly desires progeny. It does not bode me well to think of killing this child.

Suddenly assuming a human form gave the child to the king O Vrihadratha, this is your child, given back to you by me. Take it, as it has been born of both your wives by virtue of the command of the holy man. Cast away by the midwives, your son has been returned to you by Jara.

Having spoken these words Jara disappeared from there.

The king took the child and performed all the rites of infancy thereof. He named the child Jarasandha – the child which had been united by Jara. As the boy grew up he was endued with great energy and began to grow in bulk and strength like fire on which clarified butter had been poured.

This post has been written for the WordPress Daily Prompts : 365 Writing Prompts where the idea is to publish at least one post a day based on the prompts provided.

Today’s prompt was “Three people walk into a bar …” and I took the liberty of using this prompt as the first post in a series about the story of Jarasandha, the ruler of Magadha.