Today my favorite Guest Author takes us on a walk down memory lane where he narrates his experiences when he first saw his wife. This is a lovely little nostalgic post, enjoy…

My wife and I recently celebrated the 13th anniversary of our ponnu paathufying (seeing the probable bride). It’s time for a flashback. Join me as I go back to the past. The marriage proposal had come from an aged relative who knew both the families. I had firmly decided to turn down the proposal. I had come visiting only due to tremendous pressure from my uncle who had come all the way from Kumbakonam for the occasion. My (future) father-in-law had gathered his entire clan. All of Triplicane TP Koil Street was looking out of their balconies as I got off the Maruti 800 to enter my future in-law’s house. It was so embarrassing!

My (later) wife strategically had a rather chubby looking cousin seated next to her. The law of comparison kicked in. She also had her two close friends attend. Both seemed to be taking furious notes of all that I was doing. I looked at the wall and the ceiling fan and I was wishing I could disappear. My wife then offered to play the veena. I come from a rather tone deaf family and I thought that this will be the deal breaker. Instead, my mother surprisingly agreed and we were subjected to the veena recital. 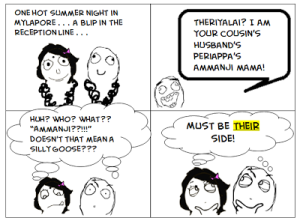 When did things turn? I was served lip smacking bonda and kesari along with piping hot coffee. It was prepared by my mother-in-law. I seriously reconsidered my situation. I asked to speak privately to the girl. This was unusual in those times. I explained to her that I was earning very less then (and actually even now) and that my job was transferrable. She promised to live within our means. She wanted to know if she could continue her dance performances. I had no problems with that. These moments of honesty don’t seem much now but they helped take a decision. I said ‘YES’ but put a condition that the marriage needed to be scheduled after 6 months. I should confess that it was to give the girl an exit path in case she didn’t want to proceed further.

Years have gone by. Here I am – married and a father of two loving daughters. My mother-in-law stays with me these days and I get a ‘maapillai’ treatment every day. Things have a way of working out though it didn’t seem so then.

I grew up when chances of boys and girls meeting were not that many. Arranged marriage was a way to link a suitable girl to a suitable boy. These days, boys and girls are far more networked and perhaps that’s why we see more love marriages these days. Love marriage or an arranged marriage is merely a means to an end. If it leads you to the person who is the one for you, the means should not matter. In my clan, every generation is more progressive than the previous one. My younger brother is married to a Singaporean. I think even if we had looked for a girl for him, we would not have found a better one for him. Will my daughters marry from outside the community? That’s fine by me as long as they are good boys.

So, do you readers have similar stories to share. Go ahead and type them out in the comments section 😀

26 thoughts on “Guest Post : When I first saw her”