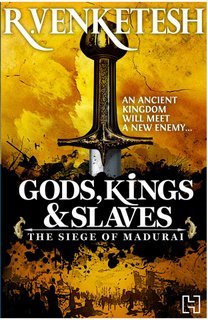 Peninsular India, fourteenth century; The Pandyan Empire is at its peak, its enemies subdued and its people at peace. Having left behind his step-brother Sundar in the race to the throne, crown prince Veera Pandyan is set to rule from Madurai, reputed to be the richest city in the subcontinent. But invisible fractures within the kingdom threaten to destroy it, and a new enemy approaches, swifter than anyone can imagine.

In Delhi, Sultan Alauddin Khilji’s trusted general, the eunuch Malik Kafur, has trained his eyes on the distant south, fabled for its riches. A slave captured by the Khiljis, Kafur is renowned for his ambition and cunning. None, not even the mighty Mongols, have defeated him – no empire can withstand the trail of destruction he leaves in his wake. And all he wants is to see Madurai on its knees, its wealth pillaged, its temples destroyed.

As an ancient city combusts in flames of treachery, bloodlust and revenge, brother will battle brother, ambition will triumph over love, slaves will rise to rule, cities will be razed to dust, and the victor will be immortalized in history…

At the outset let me confess that I am a sucker for a good yarn, that too one involving kings, kingdoms, wars and descriptions of the days of yore. And as the book blurb above clearly indicates, this books has its fair share of all of my pet peeves and it was therefore a no-brainer that Gods, Kings and Slaves would be a book that I would immensely enjoy. Coupled with the fact that the author, Venketesh has spun quite a wonderful narrative deftly mixing very little fiction with a whole lot of facts, this book was quite simply unputdownable (for lack of a better word) for me.

While one thread of the narrative deals with Veera Pandyan, his birth as the ‘bastard’ crown prince of Madurai, his constant scuffles with his half-brother Sundara Pandyan (the legitimate prince), his love for Sunanda, his friendship with Akshayan and his ascent to the throne of Madurai, the other and equally interesting narrative deals with Malik Kafur, his birth as a Gujarati Baniya, his failed love, his castration and rebirth as a eunuch and how he manages to ascend the throne of the Delhi Sultanate by sheer dint of his determination and ambition.

What worked really well for me in this book was that both these narratives run in parallel and the author has put in a commendable effort to highlight not only the differences but also the similarities between the lives of his two protagonists. Starting from their birth, to their childhood, to their adolescence where they lose their innocence, to their ultimate journey to become the masters of their surroundings and circumstances are very well brought out in the book.

Along with chronicling the lives and journeys of these two, the author also chronicles the rise of their respective kingdoms, the Pandyan Empire in Madurai and the Khilji Sultanate in Delhi. How Veera and Malik use the opportunities that life presents to them, the mistakes they make, how they overcome the various obstacles that life throws their way and how they eventually live out their lives is beautifully brought out. In that sense, this book is as much about these two dynasties as it is about these two individuals. By strongly placing their narratives in the midst of all that is happening in these two kingdoms, the author ensures that we readers have a birds’ eye view of fourteenth century India and it is in these portions that the depth of his research clearly shines through.

And when the two narratives converge in the final portions of the book, it goes without saying that the action reaches a heightened sense of tension which leaves the reader turning the pages faster and faster to see what happens next. And that to me is the hallmark of a good book, one that ensures that the reader hesitates to put it down at all in the first place.

In my opinion, this book is a must-read for anybody who likes his stories to be peppered with kings, wars, history, and a healthy dose of human emotions as well. So, what are you waiting for? Go ahead and click on either of these links to purchase the book from Flipkart [Link] or Amazon [Link].

And before I forget, I must thank my dear friend and awesome writer Sid [www.iwrotethose.com] for having gifted this e-book to me on my birthday which I finally got around to reading only now.

Disclaimer: Although I will earn a miniscule amount of commission if you purchase the books by using the above links, rest assured, you will not end up paying a rupee more than you normally would otherwise.