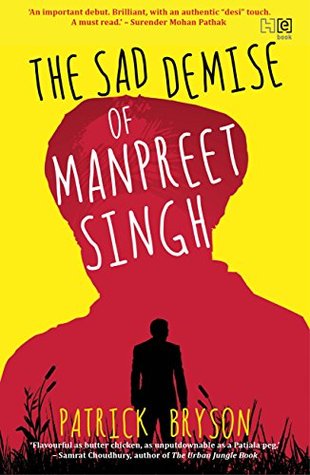 Goodreads blurb: Dominic ‘Biscuit’ McLeod is an expert in making the best of a bad situation. As a visa fraud investigator at the Australian High Commission, New Delhi, Biscuit is legendary for his prowess in drinking beer, playing cricket, and swearing like a Dilliwallah, until the tragic death of a junior colleague forces him to become something else – a conspiracy theorist who can’t let go.

Armed only with a hangover, a loathing for authority, and an inability to believe the lies that he is being told, Biscuit stumbles from crisis to catastrophe in a shambolic search for the truth. From the villages of Punjab to the cricket fields of Delhi, and the walled compounds of Gurgaon and Chanakyapuri, with dodgy visa agents, crooked cops, Aussie journalists, Afghani pimps and American spies for company, it looks like Biscuit will never solve the case, or leave the party early.

A bold, comic debut, The Sad Demise of Manpreet Singh is a novel about the things people will do to leave the places they don’t want to be – and the lengths others will go to try and stop them.

Now this truly remains one of the most unconventional books that I have read for a while now with only Em and The Big Hoom  [Link to my review] coming to mind in terms of my inability to slot it into a particular genre. Yes, The Sad Demise of Manpreet Singh, as the title suggests deals with the death of a character and the subsequent amateur investigation that the protagonist Dominic McLeod (Dom) launches into immediately. But then, the book deals with so much more and in such an unconventional manner that it simply cannot be slotted into the ‘crime thriller’ genre. And that, to me, was where the author scored so high with this book.

While the main crux of the story deals with how Dom stumbles upon a large scale visa fraud and human trafficking scandal and how he manages to unearth it layer by layer, all of the action happens in the book in an extremely unconventional manner. The author does not rely upon the time-tested clichéd manner of investigating a crime involving chases, sudden twists in the narrative and high octane action. He instead relies heavily upon his protagonist Dom just going through the motions of unravelling the true story behind this scandal gradually. While this means that the book meanders along at a fairly relaxed pace, this also means that the readers get to spend more time peeping into the innards of what makes Dom so uniquely Dom (for lack of a better term).

The inherently humorous and likeable personality of Dom, his insecurities, the things that give him happiness like guzzling down pint after pint of beer and watching cricket on television, the company of his colleagues and friends at bars and cricket grounds, his exploits on the cricket field, running in parallel with his efforts at trying to figure out the depth and details of the visa fraud mean that readers tend to view Dom more as a friend or somebody they are well acquainted with rather than just as a character in a book.

The layers of dark humor weaved in with the various characters and situations in the narrative might not immediately appeal to viewers, but will surely stay with them for some time after they have finished reading the book. And as if he wanted to end the book with a flourish, the following quote from the penultimate chapter of the book seems to sum up the author’s intentions of writing this book –

Nothing matters. None of this. You come, you do your best, and then you leave.

To me this line so aptly sums up the entire book and how it all eventually ends up. For sure, this will remain one of the most unconventionally good books that I have read in quite a while now.

Go ahead and click on one of these links to purchase the book from Flipkart [Link] or Amazon [Link]. Yes, I will make a small commission when you do so, but it will not affect your purchase price of the book.

Disclaimer: A review copy of this book was provided to me by the publishers, but the review itself is unbiased and has not been affected in any manner.