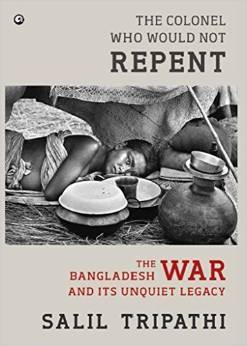 Goodreads blurb: ‘Salil Tripathi brings together the narrative skill of a novelist and the analytical tools of a political journalist to give us the story of a nation that is absorbing, haunting and illuminating.’ Kamila Shamsie, author of A God in Every Stone.

Between March and December 1971, the Pakistani army committed atrocities on an unprecedented scale in the country’s eastern wing. Pakistani troops and their collaborators were responsible for countless deaths and cases of rape. Clearly, religion alone wasn’t enough to keep Pakistan’s two halves united. From that brutal violence, Bangladesh emerged as an independent nation, but the wounds have continued to fester. The gruesome assassination of Sheikh Mujibur Rahman, the country’s charismatic first prime minister and most of his family, the coups and counter-coups which followed, accompanied by long years of military rule were individually and collectively responsible for the country’s inability to come to grips with the legacy of the Liberation War.

Four decades later, as Bangladesh tries to bring some accountability and closure to its blood-soaked past through controversial tribunals prosecuting war crimes, Salil Tripathi travels the length and breadth of the country probing the country’s trauma through interviews with hundreds of Bangladeshis. His book offers the reader an unforgettable portrait of a nation whose political history since Independence has been marked more by tragedy than triumph.

For somebody who prides himself on knowing more than quite a bit of current affairs, this book was a revelation in the sense that it opened up a whole new neighborhood in the form of the history of the formation of East Pakistan and subsequently the birth of Bangladesh to me. In fact, this book was so good that it managed to change my entire point of view on the partition of India and Pakistan in 1947 as well.

Dealing with topics such as the birth of Pakistan, the influence that Sheikh Mujibur Rahman managed to exert on the whole of East Pakistan, the issues that East Pakistan had in terms of its cultural and regional identity being at loggerheads with West Pakistan all the time, the political upheaving that the Pakistani elections of 1971 caused, the author Salil Tripathi provides us with a fairly unbiased view of how the Bangladeshi crisis was aggravated in the first place. I personally found this portion of the book to be very revealing in that it helped me get a broader understanding of the political dynamics of the partition of India and Pakistan in 1947 and the subsequent challenges that East Pakistan faced in terms of integrating with the larger and more influential West Pakistan. It also clearly highlighted how the West played ‘big brother’ to the East only on paper when the reality was that it clearly detested the East for more reasons than one.

The next portion of the book goes into great detail as to how the West initiates Operation Searchlight in March’71 which sets in motion a large chain of events over the next 9-10 months of the year in which armed conflict, its consequences on the larger populace of East Pakistan, the intervention of the Indian Armed Forces in the conflict and the subsequent declaration of independence of East Pakistan and the birth of a new nation Bangladesh is chronicled in great detail.

The book goes on to discuss war crimes such as rape and genocide rampantly committed by the West Pakistani army and its sympathizers and its impact on the overall Bangladeshi people. The fact that most of these crimes and its perpetrators are still unpunished and operate with impunity in national politics is something that still rankles the victims’ families and remains one of those inconvenient truths that the government tries to hide under the carpet. Chronicling various incidents and victims’ stories, this book presents quite a vivid picture of how armed conflict in any region of the world leaves behind volumes of untold stories of what is usually termed ‘collateral damage’ by governments and armed forces. A reading of this portion of the book simply goes on to highlight the severe impact that armed conflict in any part of the world has on the common man and his life who invariably is caught in a crossfire which is not his own making in most cases. The futility of violence as an option to resolve issues is yet again brought to the fore in this portion of the book.

The book finally ends chronicling the recent political developments in Bangladesh over the last two decades where the two prominent women politicians (both daughters of men who played significant roles in the liberation of the country) have ended up ensuring that the ‘politics of vendetta’ takes precedence over more pressing issues such as development of the nation itself.

What struck me as important and critical about this book was the fact that more than anything else, the East Pakistanis felt isolated from West Pakistan primarily due to the fact that they were not allowed to continue to live in harmony with the Bengali culture that they had followed all these years. A culture which assimilated Hindu, Muslim, Chakma and various other tribal faiths, beliefs, gods, goddesses, food and language was suddenly forced to adhere to strictly Islamic ideals and this, more than anything else, led to a whole lot of ‘bad blood’ both literally and figuratively between the Western and Eastern parts of Pakistan. In my opinion, this was yet another example where narrow minded politicians used religion, language and culture as weapons to achieve their personal goals of coming to power and staying there for as long as they possibly can. I wonder if today’s politicians of the region (and even the world over) will ever learn lessons from these episodes from history.

You can purchase the book from Flipkart [Link] or Amazon [Link].

Disclaimer: A review copy of this book was provided to me by the publishers in return for a honest and unbiased review.