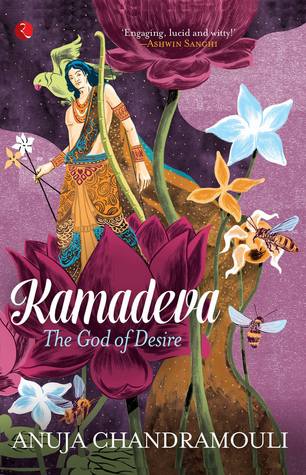 Goodreads blurb: Kamadeva, the charming wielder of the sugarcane bow and the flower-tipped arrows, born out of the wellspring of Brahmas latent passion, has for long remained an enigma. This enthralling story of the God of Desire explores his many wondrous adventures, as well as his heady romance with Rati, his chief consort.

Best friends with Indra, the King of the Gods, tutor to the Apsaras in the art of lovemaking, Kamadeva lives a dream life in the magnificent Kingdom of Amaravathi – until danger strikes when he incurs the wrath of Shiva because of a preordained curse. Follow Kama as he hurtles towards his destiny and the Destroyers dreaded third eye. Find out if he will rise from the ashes to reign supreme as the King of Hearts or if he will be doomed to spend an eternity as Ananga – The bodiless one.

In Kamadeva – The God of Desire, the author masterfully marries imagination with stellar research to bring to vivid life one of the most intriguing Gods of the Hindu pantheon. Laced with wit and narrated in contemporary flavour, Kamadeva will take you on a rollicking ride into the heart of desire and its tantalizing dark side.

With this book, the author Anuja Chandramouli uses an extremely irreverent and cheeky tone to tell us the tale of one of the most under-appreciated and oft misunderstood characters from Indian mythology, Kamadeva. Starting from the unique story of his birth and that of his consort Rati, to his persistent squabbles with his father Brahma on various issues, the first part of the book deals with how Kama eventually finds his way to Amaravathi, and goes on to become a very good friend of Indra, the King of Gods. Here, the author uses their friendship to narrate some of the stories involving Indra, his various expeditions into the realms of mortals and Asuras and how he manages to get himself into trouble more often than not. Anuja cleverly uses these stories to highlight how Indian mythology in general seems to favor the male chauvinistic attitude and tends to use its female characters are mere props or worse the instigators of all the troubles of the world.

As the narration progresses, Kama finds himself on a path hurtling towards his certain doom as pre-ordained by his father Brahma at the hands of Shiva, the Destroyer. What happens thereof forms the second part of the book and deals with the life of Pradyumna, the incarnation of Kama as the mortal son of Krishna. Pradyumna, the purpose of his birth, the love of his life Maya and his life with Krishna is detailed in a lovely narrative in this part of the book.

What this book does is that it brings to light some of the lesser known tales from Indian mythology, especially those involving Indra and his dalliances with lovely damsels from the Three Worlds. And given the mythology buff that I am, I truly enjoyed this book and for sure it has given me enough fodder for the mythology related posts on my blog.

What also endeared this book to me quite a bit was the fact that the author chose to treat the Gods almost on par with mere mortals and she has also successfully managed to try and bring out some of the motivations behind their actions, their deepest fears and desires; after all this is a book about the God of Desire and in hindsight it was but natural that she took this approach. The use of colloquial dialogues between the characters and the friendly banter that they share with each other was a refreshing change from the normal style in which mythological books are written. Yes, while purist readers of Indian mythology might have issues with the same, kudos to Anuja Chandramouli for having taken the brave decision to take this path and what’s more she seems to have succeeded wonderfully well given the warm reception that this book has received. She has more than successfully managed to ‘humanize’ the Gods mentioned in this book, and that to me, is quite an achievement of sorts.

So, what are you still waiting for? Go ahead and click on either of the following links to purchase the book from Flipkart [Link] or Amazon [Link].

Disclaimer: A review copy of this book was provided to me by the publishers in return for an honest and unbiased review.