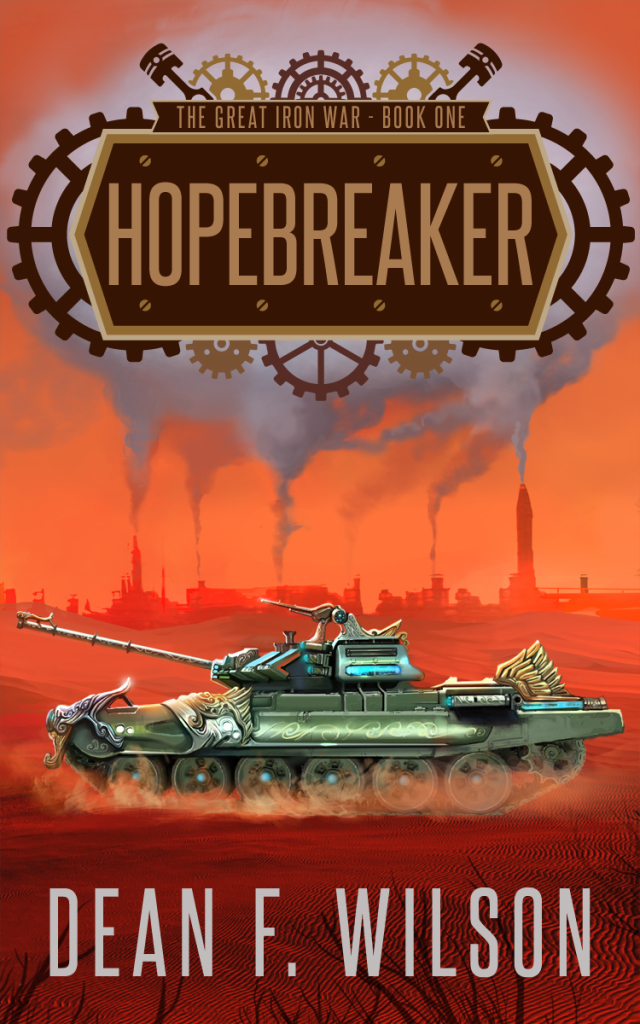 Goodreads blurb: In the world of Altadas, there are no more human births. The Regime is replacing the unborn with demons, while the Resistance is trying to destroy a drug called Hope that the demons need to survive.

Between these two warring factions lies Jacob, a man who profits from smuggling contraceptive amulets into the city of Blackout. He cares little about the Great Iron War, but a chance capture, and an even more accidental rescue, embroils him in a plot to starve the Regime from power.

When Hope is an enemy, Jacob finds it harder than he thought to remain indifferent. When the Resistance opts to field its experimental landship, the Hopebreaker, the world may find that one victory does not win a war.

Set in the dystopian future world of Altadas, Jacob, a small time smuggler is unwittingly caught in the middle between the warring forces of the Regime and the resistance in the form of the Order. And for reasons not immediately obvious Jacob finds himself drawn to Taberah, a lieutenant of the Order and try as much as he may, he finds himself unable to leave her side and joins the Order against the evil Regime.

Starting from the initial prison break sequence, moving on to the Order’s attempt at trying to destroy a Hope factory and ending with the Whistler’s kidnapping, the author Dean Wilson manages to keep the action ticking along at quite breakneck speed. There are not too many moments of quiet respite and that is one thing which works really well for this book, more so because the action sequences are quite well written and manage to draw the reader into them completely.

Given that this book is set firmly in the steampunk science fiction genre, the author has resisted the temptation to verbose descriptions of the world, the settings in which the story is set and instead relies on conversations between the protagonists or their occasional musings about the past which has led the world to be what it is today. This works really well in the sense that the reader is left to his own imagination in terms of the actual setting in which the story is set.

There however were some bits of the book, especially the relationship between Jacob and Taberah which reminded me a lot of the relationship between Han Solo and Princess Leia from the Star Wars series – the renegade bounty hunter who reluctantly joins the cause of the good guys and ultimately proves to be of invaluable assistance to the cause itself. And I refer to this comparison in a good way, given that I am comparing Hopebreaker with one of the greatest science fiction series of all time.

Click on either of the links to purchase the Kindle version of the book from Amazon [Link].

More about the author –

Disclaimer: This review is written as part of b00k r3vi3w Review Tour for this book. I was offered an electronic review version of this book in return for a honest and unbiased review.