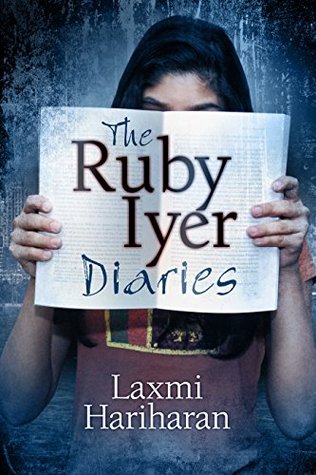 Goodreads blurb: This novelette is a companion book to The Many Lives of Ruby Iyer. A peek into the soul of an angry, young girl, who will come of age in a city on the verge of total annihilation. Ruby kept a diary from the age of ten till she ran away from home at sixteen. It is from here that I picked out a few diary entries for The Ruby Iyer Diaries. This short series of vignettes from Ruby’s life, tells you more a little more about the origins of Ruby Iyer.

While I have heard more and enough about The Ruby Iyer series of books I haven’t quite done the honors of actually adding the books themselves to my To Read list and procure them. But when I was approached to read and review the same, I immediately jumped at the opportunity and grabbed it with both hands given that I had immensely enjoyed the series of blog posts that Laxmi Hariharan, the author had published on her blog introducing us to Ruby Iyer, the protagonist of this series.

This novelette, The Ruby Iyer Diaries, as the blurb states is a companion book and is more of a series of diary entries of Ruby from the time she was ten till around the time the incidents of the first book in the series starts.

Suffice to say that this novelette provides enough and more spice for prospective readers of the series, such as myself, to lick their lips in anticipation of more. The spunk, determination, angst and some of the weirder motivations of Ruby come to the fore in these diary entries and leave readers with no doubt as to how Ruby would react to situations that are thrown in front of her in the books themselves. If anything, the diary entries themselves left me impatient to get around to reading the books and see Ruby in action.

Her somewhat dysfunctional family with a mother who seems to care only for her younger brother more than for her, her father who seems to love her but is not around often enough, her anger issues, her encounters with a perverted shrink, her first violent encounter, all of these and a bit more are brought out in this novelette and as I stated earlier as well, there is enough and more to leave readers wanting to read more about this extremely interesting character.

A review copy of this novelette was provided to me by Debdatta from b00kr3vi3ws in return for an honest and unbiased review of the same.