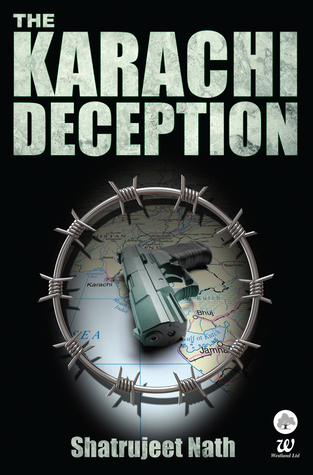 Major Imtiaz Ahmed is picked to lead the special ops mission deep inside Pakistan — but the ISI and Dilawar are several steps ahead of the Indians. Beaten at every turn, Major Imtiaz is faced with the horrifying realization that Project Abhimanyu has been compromised… and his men are being lured into a deadly trap.

Set against the backdrop of global terrorism, Shatrujeet Nath’s debut novel is a quintessential spy thriller where nothing is what it seems — and treachery is a constant companion.

While The Karachi Deception is the debut book of author Shatrujeet Nath, it is not the first book of his that I read. In fact I so thoroughly enjoyed The Guardians of Halahala (link to my review) that it prompted me to pick this book of his and man, was this book fun to read or what.

Having been brought up on a staple diet of Frederick Forsyth and some other really good spy thriller writers, I have been exposed to more than my fair share of books in this genre. Add to this the fact that I absolutely enjoy watching movies as well in the spy action thriller genre meant that I have had more than my fair share of exposure to stories and plots in this genre. And believe me when I say this The Karachi Deception can easily be put alongside some of the all-time great books of this genre and can easily stand its ground when compared with them as well.

As the blurb reads, the narrative itself deals with Project Abhimanyu, an operation involving three Indian commandos deep inside Pakistan who find themselves being outsmarted, outwitted and in general failing at every step of their mission. The reasons for their failures, their subsequent Plan B (and even Plan C), the frenetic working-behind-the-scenes at the Project HQ back in India and the final confrontation, all of these make up for a true blue page turner, blockbuster of a book.

Given that the setting is so close to home, the protagonist based on a famous gangster that most of us are aware of, and the overarching plot involving global terrorism in our own neighborhood, it was a no-brainer that I would go on to enjoy the book. And the fact that the author has managed to weave a thoroughly researched, well-paced, and wonderfully written book using all of the above elements meant that this is one book that was a breezy read. Here’s hoping that the author manages to pull out some time from his Vikramaditya trilogy of books and churns out a few more in this genre, as this book clearly proves that he truly has the flair to write some really good books in this genre as well.

One thought on “The Karachi Deception – Shatrujeet Nath – Book Review”