Goodreads blurb: Senior Inspector Saralkar is back at his desk after spending a rather annoying week at a Secrets of Living course, especially for police officers and he is itching for some action now. Luckily, an exciting new case turns up right away!

The body of Ashish Karve, a local businessman has been found in the back seat of his car. To PSI Motkar, Saralkar’s diminutive assistant, it seems to be a straightforward case of suicide. But Saralkar’s sharp mind is agog with the dark possibility of murder. As the case unfolds Saralkar finds enough motives for people, be it Ashish’s business partner, his wife, his brother, his friend, his brother-in-law or even strangers to want to do away with him! Is the senior inspector becoming too fanciful in his imagination or is he on the right track in assuming that Ashish was killed?

Delve into this deliciously thrilling whodunit and walk along with Senior Inspector Saralkar and PSI Motkar as they set out to sift the truth from lies and half truths.

As the blurb states, at the outset, there is nothing quite remarkable about how Ashish Karve is found dead in the backseat of his car. It seemed like quite an open-shut case where he has slashed his wrists and bled to death. But something about the entire scene prompts Senior Inspector Saralkar to doubt the possibility of murder and he takes along a skeptical partner in his subordinate Inspector Motkar on a journey of discovering the truth behind Ashish Karve’s death.

Pretty soon the duo find themselves embroiled in a myriad web of characters involving friends, families and people from the victim’s past who might have had a motive to kill him. As if things weren’t bad enough, some of the alibis of the people they interview also doesn’t hold up and they end up with a multiplicity of choices in terms of possible suspects and their motives for the crime. What promised to be a relatively simple case turns out to be quite the headache for the investigating team of Saralkar and Motkar.

To make things even more interesting and complicated, one of the people involved with this case gets murdered and it is quite obvious that it was due to the connection to the Karve case. This spurs the duo into frenzied action which culminates in a climax where all loose ends are tied up, the perpetrator identified and brought to justice.

What really worked well for me in this book was the detailing that the author Salil Desai paid to the policing procedural. This probably was the first murder mystery I have read where the nitty-gritty’s of policing are explained in great detail and readers will truly appreciate the mundaneness and  ordinariness of the entire investigation procedure followed by police personnel during the investigation of a crime.

Another aspect of the book that worked really well for me was the odd yet unique pairing of Saralkar and Motkar. While the superior officer is clearly well within his elements during the investigative process, the dynamics he enjoys with his subordinate and the mostly meek Motkar and the chemistry between them is quite enjoyable. The author also takes small strategic segues into the personal lives of both of them, more Motkar than Saralkar, and this helps readers appreciate and relate to them a little more and understand their thought processes a little more. Given that this is the first book of a planned trilogy, these attempts will go a long way in cementing these characters in the readers’ psyche.

In summary, do read this book if you are fan of the crime thriller genre and more so if you like well researched police procedurals.

So, what are you waiting for, go ahead and click on either of these links to purchase the book from Flipkart [Link] or Amazon [Link].

Disclaimer: This book was given to me by the publicist of Fingerprint books to be reviewed, but my review is completely honest and unbiased and was in no way influenced by the publisher or the publicist.

Disclaimer: Yes, I will earn a small commission if you purchase the books by clicking on either of the links above, but it will not make any difference to your purchase price. 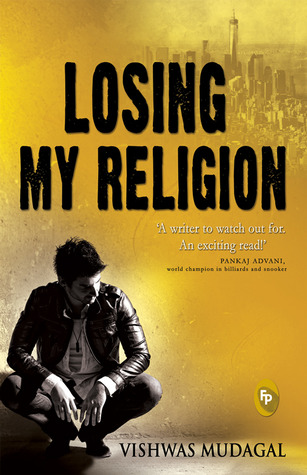 Racy, unpredictable, romantic, and inspiring, this is a novel that is bound to get you addicted and stay with you forever.

When gamer and entrepreneur Rishi Rai sets out to revolutionize the gaming industry, something somewhere goes terribly wrong and, like dominoes, the blocks of his life fall down one after the other.

An unexpected meeting with Alex, an unpredictable, crazy American hippie, changes his life forever, as he decides to quit everything and join him on an unplanned, uncharted journey across India.

From getting irrepressibly high in the mysterious Malana Valley in the Himalayas to starting a shack on the bewitching Om Beach on the West Coast, they do it all. But their adrenaline-charged adventure takes a turn when Rishi meets Kyra, a beautiful and enigmatic gamer. As passions surge and sparks fly, Rishi gets drawn to Kyra . . . unaware of who she is and where she comes from.

What follows next is something nobody could have ever dreamed of . . .

Who is Kyra and why are the paparazzi after her? Can Rishi connect the dots in his life to protect the love of his life? While the world becomes a spectator, can he mastermind the fall of a ruthless giant to become a global icon or will he become the biggest loser?

**Mild spoilers follow. Please leave if you want to read the book without knowing the spoilers**

As the second paragraph of the blurb states, the book begins with the protagonist Rishi Rai having pretty much lost everything in his life, his money, his girlfriend, his zeal to live and almost all of his energy and enthusiasm. A mindless drive down the Bangalore-Mysore highway ends up in a chance encounter with a junkie Alex which ends up being serendipitous for Rishi.

The two of them end up travelling to the Malana Valley in the Himalayas in search of the (in)famous Malana Cream (dope) and in the bargain literally bite off more than they can chew. A few pages and a few rolls down the hillside later, they find themselves setting up a shack on the Om Beach in Gokarna, Karnataka. The journey from Bangalore to the Malana Valley to Gokarna doesn’t quite really matter, because in true filmy style, what Rishi and Alex want, the universe conspires to make it happen for them.

Destiny once again puts Kyra in front of Rishi who promptly falls head over heels in love with her, and a couple of ‘almost there but not quite there’ moments and incidents, she also manages to fall in love with him. This begins the classic and clichéd ‘rich girl falls in love with poor guy’ kind of storyline in the book, and ends up with Rishi winning a Mortal Kombat gaming competition (of all the competitions in the world) to woo Kyra. And as is the norm Rishi ends up losing Kyra when she walks out of his life as well. It takes him a couple of drinks and smoking up on Malana Cream to get over it and he once again fortuitously ends up making big money and history out of a business opportunity at the Kumbh Mela, no less. As if this weren’t good enough, lo and behold, Kyra turns up in his life again. Turns out that she also missed him as much as he did.

Turns out Kyra is more than just another rich kid, she turns out to be ‘the rich kid’ and the story then takes us to the Big Apple where Kyra’s dad and his business rivalry with an obviously ‘bad business magnate’ takes center stage. Rishi inadvertently manages to get involved bang in the middle of this rivalry and the last part of the book deals with a reality show similar to Donald Trump’s ‘The Apprentice’.

While ‘Losing my religion’ by itself is not such a bad book, what probably disappointed me was the fact that it was built up and hyped up to be a very good book, very much more than what it turned out to be, at least for me personally.

Yes, while Rishi Rai’s ability to bounce back from all his failures without losing hope and ability to make the most of whatever life threw at him impressed me, the fact that he ended up using something like illegal dope to fund his new ventures didn’t quite work for me at all. Someone like Vishwas Mudagal having to choose an easy, filmy way out to fund his protagonist’s business ventures didn’t strike me as being realistic at all.

And the entire romantic angle seemed so contrived, what with Kyra having to be an American. It almost felt forced to enable the story to move to the US of A at the very end and served as a reason for the entire commercial potboiler that the book becomes with the reality show aspect of it.

At the end of the book, it felt like I had watched a couple of movies in which the main characters were the same, but told two or three different stories. I personally couldn’t find one single thread which strongly bound the book together. Yes, the book sells hope to young India, but am not sure it sells it in the ‘right way’, if there is one. It teaches young Indians not to lose heart when life hits them hard, but telling them to try to sell dope to start a business venture doesn’t make too much sense.

But then, maybe I am reading too much into what probably was intended as a ‘fun read’ and nothing more.

Read this kinder review of the book here by a good friend Sakshi Nanda if not for anything else, for the sheer penchant and style with which she has reviewed the book. Whatever Sakshi does, she does with style, no two ways about that.