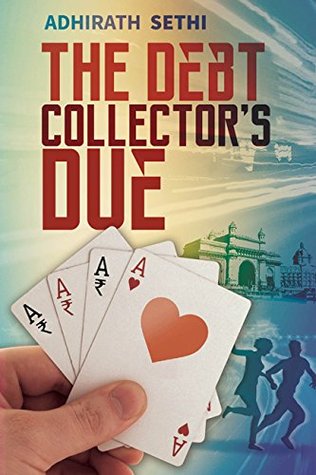 Goodreads blurb: There comes a day in every boy’s life when he needs to sit down and decide what to do with the rest of it. But our layabout hero, Samay, slept through it, as he did most days growing up. Waking up aged twenty-nine, he finds that he barely has any money left in the bank and the only job anyone is willing to give him is as a debt collector for small businesses.

To top it all, he has had no luck with his college flame, Amrita. They were close friends once but are not even in touch any more.

His less-than-ordinary life takes a mad turn when he is mistaken by mob boss Pande for a hitman and given Rs 75 lakh as payment. Samay wants to take the money and flee the city, but he discovers that Amrita, now a journalist, is next on the hit list…

The Debt Collector’s Due is a wild ride through the drama of college heartbreak and a terrifying murder in south Mumbai’s Parsi colony to the sweaty alleys of Crawford Market and the mist-filled valley of Panchgani. This is a story about shifting fortunes and high stakes, a breathless read from the first page to the very last word.

The Debt Collector’s Due is one of those simple fiction stories which have a reasonably simple story arc, easy to follow narrative and ordinary likeable characters. Unlike most debut authors who try and set out to tell a grand story with multiple narratives, parallel intertwining plot lines, Adhirath Sethi with this book takes us on a small journey with Samay Agrawal and his process of ‘coming of age’ so to speak.

The protagonist Samay is a ‘good for nothing’ kind of kid who has done nothing of note with his life, save for being friends with Amrita, who in any case dumps him to pursue a journalism course in Delhi. Pushed into a corner with no other option of earning money, Samay gets into the unofficial debt collection business and surprisingly turns out to be reasonably good at his job as well.

When one of his jobs goes bad and he gets mixed up with some particularly unsavory elements, it puts his story on a headlong collision course with that of Amrita’s, who by now is a ‘marked (wo)man’ by the mob for her revealing expose of a cover story. What happens when Samay gets back into her life is what forms the fairly well written climax of this story.

What I particularly liked about the book was that it is written in fairly simple language, is quite straightforward about how the narrative unfolds and the best of all is very crisp running into only 170 odd pages. The author makes no pretence of trying to write the next Indian spy thriller or anything great, and ends up churning out a good quick read in the bargain.

Disclaimer: A review copy of this book was given to me by the publishers in return for a honest and unbiased review of the same.