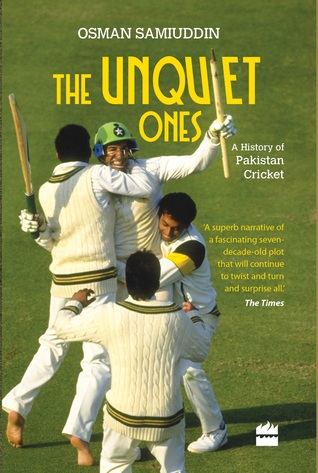 Goodreads blurb: THE DEFINITIVE HISTORY OF A CRICKET TEAM THE WORLD LOVES TO WATCH BUT IS AT A LOSS TO EXPLAIN

The story of Pakistan cricket is dramatic, tortured, heroic and tumultuous.

From a beginning with nothing after the Partition of 1947 to the jubilation of its victory against England at the Oval in 1954; from earning its Test status and competing with the best to sealing a golden age by winning the World Cup in 1992; from its magic in Sharjah to an era-defining low in the new millennium: Pakistan’s cricketing fortunes have never ceased to thrill.

This book is the story of those fortunes and how, in the process, the game transformed from an urban, exclusive sport into a glue uniting millions in a vast, disparate country. Osman Samiuddin captures the jazba of the men who played for Pakistan, celebrates their headiest moments and many upheavals, and brings to life some of their most famous—and infamous—contests, tours and moments.

Ambitious, spirited and often heartbreaking, ‘The Unquiet Ones’ is a comprehensive portrait of not just a Pakistani sport, but a national majboori, a compulsion whose outcome can surprise and shock, and can become the barometer of everyday life in Pakistan, tailing its ups and downs, its moods and character.

An enduring image of my childhood days remains Imran Khan taking that tall leap just before he delivered his ball. So much so that I modeled my own amateur and sometimes effective fast bowling action (tennis ball only, mind you) on him. That was the craze and passion that the tall Pathan evoked in me in those heady days. It therefore follows that any book on cricket in general and Pakistan cricket in particular would be gobbled up by me quite happily, and The Unquiet Ones: A history of Pakistan cricket by Osman Samiuddin is so well researched and well written that it was quite an easy read.

The term ‘easy read’ takes nothing away from the relatively painstaking research and the amount of hard work that has gone into this book. After all, going back more than 75+ years to the early 1930s when the Gentleman’s Game starting taking root in the subcontinent and spanning seven plus decades till around 2010 without resorting to the easily taken route of just presenting statistics and easily available nuggets of information from publicly available sources will result in a well written book, won’t it. The author’s passion for the game of cricket and Pakistan cricket in particular can easily be gleaned not only from the fact that he is a contributing editor to ESPNCricinfo.com but also from the manner in which he has approached this book.

While tackling the characters and events in a chronological manner, he also goes on to analyze and detail in an easy to understand fashion how these characters and events went on to fashion Pakistan cricket to leave it in the state that it currently finds itself in. Ranging from the very first superstars Kardar and Fazal, moving on to the Mohammed brother trio, and then to Imran, Miandad, Akram and Waqar and finally ending up with Younis Khan, Shoaib Malik and Misbah-Ul-Haq, this book covers all noteworthy cricketers till date.

If you have ever been a fan of Pakistan cricket or cricket in general, then for sure, this is one must-read book. Click here to purchase the book from Flipkart [Link] or Amazon [Link].

Disclaimer: A review copy of this book was provided to me by the publisher in return for a honest and unbiased review of the same.