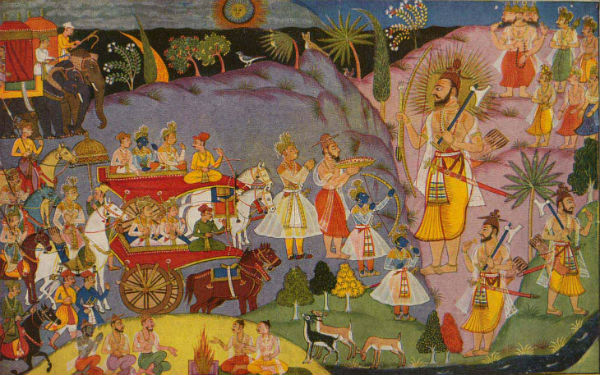 Parasurama is a unique avatar in the sense that he makes an appearance in the story of Rama, another avatar of Lord Vishnu.

King Janaka had laid down the condition that he would offer his daughter Sita’s hand in marriage to anybody who would be able to string Shiva’s celestial bow which was in his possession. When Rama arrives at Janaka’s court and very easily manages to string the bow, he becomes eligible to marry Sita. After the wedding, when the procession leaves Mithila, the capital city of Janaka and proceeds towards Ayodhya, they suddenly witness strange omens and a fierce tempest.

Out of the darkness and dust that had engulfed the procession, there emerged the fearsome form of Parasurama dressed in tiger skins with matted locks of hair on his head. The warrior sage Parasurama had a reputation as being a fierce warrior who had single-handedly overcome the Kshatriya race on earth multiple times. He now stood before the procession with his battle-axe in one hand and an arrow which resembled lightning in the other hand.

After accepting the honor accorded to him by Dasharatha’s priests, Parasurama addresses Rama O Rama, I have heard of your strength and prowess. By stringing and breaking Shiva’s bow, you have performed an incredible feat.

You have surely heard of my vow against the Kshatriyas. How can I tolerate such prowess in a Kshatriya such as yourself? I have here another sacred bow of Vishnu. Fit this celestial arrow upon this bow and draw it to its full strength. If you are able to do, I challenge you to single combat.

Dasaratha was horrified at this turn of events. Parasurama’s unforgiving hatred against all Kshatriyas was something that all of them had heard about and learnt to be scared of from the time they were all little children. He approached the sage with folded arms and entreated him to spare the young prince. Parasurama ignored him and continued to address Rama.

Both the bow broken by you and the one I carry now were crafted by the architect of the gods, Visvakarma. The one you broke earlier belonged to Shiva, but this one belonged to Vishnu and is therefore more powerful.

This bow has been passed on by Vishnu to my ancestors and thereafter to me. I now offer it to you, Rama. Considering your sacred duty as a warrior to always accept a challenge, exhibit your strength to me.

Unperturbed by Parasurama’s anger and demeanor, Rama addressed him thus You are a Brahmin sage and are therefore worthy of my worship. However since you despise the entire Kshatriya class, you despise me and I therefore have no choice but to display my prowess to you.

Rama took the bow and arrow from Parasurama, easily fit the arrow in the bow and drew it to its fullest extent, and asked the sage Where shall I discharge this deadly arrow? As you are my superior, I cannot aim it at you.

Impressed and astonished Parasurama immediately realized that this was no ordinary Kshatriya standing there in front of him. You surely must be Lord Vishnu himself. I accept defeat but am not ashamed as you are indeed the lord of all the worlds.

You have already divested me of all my power and my pride. Please release this arrow on my desires for heavenly pleasures and burn them to ashes. The only thing that I now desire is to become your eternal servant.

Saying so Parasurama bowed down before Rama who released the arrow. The sage immediately vanished along with the arrow. Varuna, the god of the water then appeared before Rama and gave him the celestial bow to keep, on behalf of all the gods.

15 thoughts on “Parasurama in the Ramayana”